From Denmark To America; The Jansens of Schleswig (Part 1) 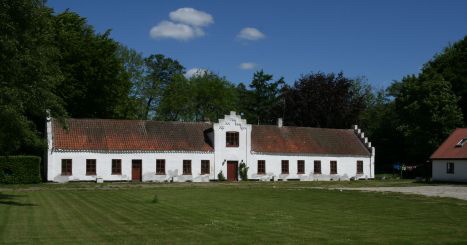 Introduction- The story of the Peterson Family has its roots and many branches in Denmark and in what is now the German state of Schleswig. While exploring these branches I rediscovered lives from as many as six generations ago. But I didn't do it alone. Along the way I met my fourth cousin, Henning Bender, a noted Danish historian, archivist, and expert on Danish immigration. He did much of the groundwork, all I did was connect a few of the dots. His help and input, and above all his translations from Danish to English have been invaluable.

Part of the fun of studying history is playing the "what if?" game. If a British sniper during World War I had shot the German private in his sites- his name was Adolf Hitler- would fascism fail in Germany or never taken root at all? If Lee Harvey Oswald  had failed in assassinating President Kennedy, would there have been a troop withdraw in Southeast Asia, thus saving more than 50,000 American lives.

And in 1815, what if Napoleon defeated the British under Wellington and Prussians under Blucher at Waterloo? It would have changed history- and perhaps the history of our family. Because with Napoleon's defeat Prussia emerged a European superpower. And soon Prussia would begin the process of uniting all of what was to become Germany through unification, and annexation, and by conquest. Two wars would be fought between Prussia and Denmark, with the once semi autonomous Duchy of Schleswig, the ancestral homeland of my Danish great grandmother Georgine Vilhelmine Jansen, being ceded to Germany in 1864. But by that time her parents, Hans Jacob Jansen and Ane Christine Ohms, were long gone from Schleswig. This is their story.

The family patriarch Gerhard was a dairy man, providing milk and other products for citizens around the area of Eckernforde in Schleswig. Operation of dairies appears to have been a family business going back generations in Schleswig, from Gerhard's father Thomas Laborious Jansen (born 1746), his grandfather Nicolaus Jansen (born 1689) to his great grandfather Walch Jansen (born about 1660). One thing I found striking in researching this bloodline was the size of the families. Gerhard had seven children and was the youngest of eight.  His father Thomas was one of eleven, and grandfather Nicolaus had thirteen sons and daughters. Great grandfather Walch appears to have been married three times with two wives dying after childbirth, and he apparently fathered six children in all.

These large families for the most part don't include records of children that may have passed on after birth. Infant mortality was as high as 50% in those years. And the fact that they did have so many children indicates that the Jansens were probably well to do, and needed their children to help help produce products on the dairy farms they operated over the years. Also, with so many children who produced many children themselves, it becomes very clear that the Jansens were and are numerous to the present day, not only in Denmark but in what was to become Germany.

While researching this branch of the family, several things jumped out at me. The most obvious was the use of the "Jansen" surname from generation to generation. In most of Scandinavia surnames changed with each generation. Our paternal great grandfather Soren Pedersen was the son of Peder Christiansen and Karen Pedersdatter (gender changed with the sex of the child). Karen was the daughter of Peder Michelsen. But in Schleswig the custom was to retain the surname and pass it on from generation to generation. The rest of Denmark mandated that surnames be constant and passed on in a decree in 1856.

Another difference found in Schleswig was the more German sounding first names of some of the population, even among those with Danish surnames. The majority of those living in Schleswig and the neighboring province of Holstein were Danish historically. But this began to change in the early 19th century, around the time of the births of Gerhard Jansen's children. The German minority had become a majority. Where Schleswig's Danish speaking and German speaking populations once lived harmoniously for years, conflicts arose. Some of it was due to the mounting sentiments of German nationalism. Prussia would take the lead in uniting all of the smaller German speaking principalities into a new state, the new Germany.

It would take time, but this domestic upheaval in 19th century Schleswig would have a profound affect on the Jansen family, and create a path that eventually lead to the United States for a some.

The 1840's were years of change in Europe, and in 1848 many nations were experiencing revolutions. In what became known as "The Year of Revolutions" the French people again rose up once more against its monarchy, as did citizens in Austria. And in Denmark the absolute rule of Danish kings ended with the death of King Christian VIII and the ascent of Frederick VII. King Frederick agreed to share power with a bicameral legislature and Denmark became a constitutional monarchy, similar to the United Kingdom. A new constitution was adopted for Denmark, but it did not apply to the semi-autonomous Duchy of Schleswig.

While revolution had positive results in Denmark, in Germany it collapsed. German states remained domains dominated by autocrats and a military class. The German majority of Schleswig did not want unification with Denmark, and with the support of allied German states they revolted, along with the sister province of Holstein. The First Schleswig War raged for three years, with Denmark prevailing.

But peace was not to be. Hostilities erupted again in 1864 when Prussia and Austria waged war against Denmark. The Danes were defeated in the Second Schleswig War, and the provinces of Schleswig and Holstein were ceded to Prussia, and subsequently became part of a unified Germany.

And it was sometime shortly before or during the First Schleswig War that Hans Jacob Jansen and his younger brother Carl Frederik left Schleswig and moved north, halfway up Denmark's Jutland Peninsula. Several siblings and their parents stayed behind. Its not clear if Hans or Carl ever returned to their native Schleswig again.

At about the same time the Jansen brothers were leaving Schleswig, a 19 year old woman began work as a domestic at the Steen Marks Manor in Randers in Denmark. She was of mixed German-Danish extraction, and was born in Schleswig, in the town of Eckernforde in 1826.

Her name was Ane Christine Ohms. She would meet and marry Hans Jacob years later. Their daughter, Georgine Vilhelmine Jansen would immigrate to America in 1888, with her husband Soren Pedersen and their two little children.

Their stories will be told when we continue.