From Denmark To America; Ane Christine and Hans Jacob, and Georgine and Soren (Part 2) 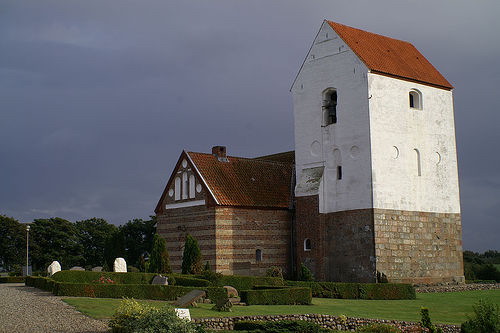 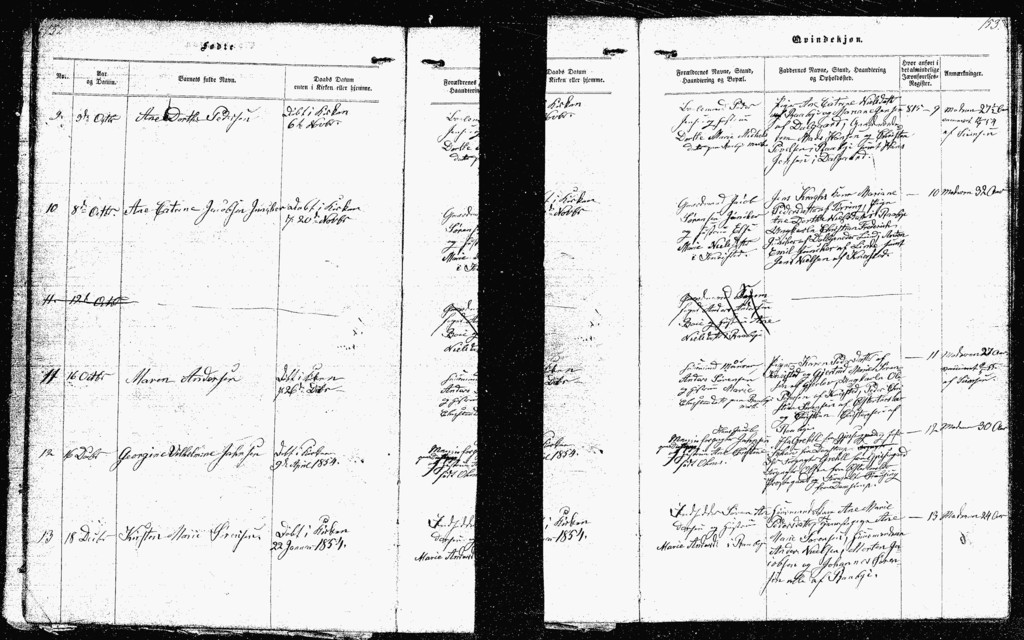 The church registry indicating the birth of  Georgine Jansen

Most of us have secrets not shared with anyone, or if we do choose to share it is with a select few. Part of the fun of studying genealogy and family history is the discovery of new information and uncovering old secrets, and trying to ascertain why ancestors did what they did when they did it. And in this entry we'll talk about a family secret that was buried.....or covered up.....for more than 160 years.

When I began researching our Danish ancestors I knew very little about any of them. I knew the great grandparents who were known in America as Soren and Georgianna Peterson came from Denmark with two children in 1888. Years ago Dad told me they came from Kolding, on the Jutland peninsula. And that was about it- no definite place of birth, or year, or names of parents.

Since then, with some luck and much help, I was able to trace our great grandmother, Georgine (in Danish) to the province of Schleswig. And in time I discovered more branches of our family in Denmark and what is now Germany than could ever be imagined. Of course, in time I made a connection with a fourth cousin, Henning Bender, a noted Danish historian and archivist who pointed the way on this journey of discovery. The registry above was provided by Henning- it is from Randers, Denmark and shows that Georgine Vilhelmine Jansen (Johnsen) was born on 16 December, 1853 (line 12). Her parents were Ane Christine Ohms, a 26 year old milkmaid; her father was dairy manager Hans Jacob Jansen, age 41. Both were from Schleswig, and as Ane's name indicates she was of at least partial German ancestry, but was a Danish citizen.

We may probably never know the exact time Hans and Ane left Schleswig and moved to the east coast of the Jutland peninsula, or if they knew each other in Schleswig. We can speculate the unstable political situation in Schleswig, with war with Prussia eminent, may have been the determining factor. We do know that by 1850 both Ane and Hans were in Randers, far from the conflict in the duchy of their birth.

Ane Christine Ohms was born in Eckernforde, Schleswig in 1826. By the time she was 19 Ane had relocated to  Randers, a town roughly at the midway point of Denmark's Jutland peninsula on its east coast. The Danish capital of Copnhagen lay to the southeast of Randers, about 225 kilometers away by ferry boat and by road. Ane first shows up in Denmark's 1845 Census at the Steen Marks Manor where she was a milkmaid. It appears the employees shared quarters in a building on the manor. Ane lived with several other workers of Steen Marks Manor, with dairy tenant Niels Peter la Cour and his brother theology student Johannes Georg la Cour listed as head of the household.

The next historical mention of Ane Christine was in the 1850 Danish Census. She had moved to another position at Demstrup Manor, 24 kilometers northeast of Steen Marks. At Demstrup she was a member of the household of dairy tenant Hans Jacob Jansen, then 38 years old. Also in the household were sisters Mariane Rasmusen (age 30), Kirsten Marie Rasmusen (24), and Karen Marie Hansdatter (42), and Knud Knudsen (30). It appears that all of the single workers shared a home while married workers and their families occupied separate quarters. While Ane Christine and Hans Jacob were natives of Schleswig, it appears the other members of the household were born in the area around Demstrup Manor.

There is no historical mention of Ane Christine Ohms again until 1852, when a baby girl named Frederica Margrete Sorensen was born on March 31, 1852, and christened in Raaby on August 29, 1852. Little Frederica's mother was Ane Christine Ohms, and father was given as Peter Bogild. Peter and Ane never married. According to a translation given to me by Henning Bender, Ane confided to a local clergyman that Peter Bogild, a local schoolteacher, was Frederica's father. Peder Bogild then apparently ran off, abandoning Ane and his newborn daughter. As for the choice of the "Sorensen" surname, it remains a mystery. Perhaps it was a surname from Ane's family. Or maybe it was just a smokescreen to protect Peter Bogild and Ane back in an era of Victorian morality. At any rate, it appears Peter Bogild succeeded in vanishing, because today no other record of his existence can be found. Since he was a schoolteacher we can assume he must have been more literate than the average person of the day, and maybe even higher born. One fact remains- Ane Christine was left with a child to rear on her own. But not for long.

On November 24, 1853, Ane Christine Ohms (age 27) and Hans Jacob Jansen (age 41) were married in Raby, Arhus, Denmark. Their daughter, Georgine Vilhelmine Jansen was born the next month on December 16, 1853.  By 1855 Hans Jacob had become the dairy manager of Oerbaek Farm near Randers. Ane and Hans had a growing family. Besides little Frederica and Georgine, Sophie Marie (born 1855), Georg Peter (1856), and Emil Richard (1859) were born to them in about five years. Another daughter, Margrethe (born 1862) died months after birth.

It is in 1880 and the Danish Census that we again find the family of Hans Jacob and Ane Christine Jansen. Hans and Ane Christine and family had by then relocated to Taulov in Vejle. By that time Georg and Emil had left their parents home, with Georg eventually emigrating to America and settling in Chicago, where he died in 1945. Sophie Marie had left the nest as well- only oldest daughters Frederica (age 28) and Georgine (27) remained in their parents home. However, in 1880 we find a new addition- Frederica's husband Peter Christiansen Petersen, a shoemaker who was originally from Schleswig. Living with the Jansen family were two divorced women, 78 year old Mette Kirstine Smith and her daughter, 38 year old Mette Johanne Vihrs. The younger Mette's infant daughter Johanne Marie Kirstine Kjaer was in the household as well- and so was a 46 year old tailor named Jens Pedersen and his apprentice, 21 year old Peter Jensen. Its not clear if these other people were boarders or domestic help.

About five kilometers to the south of Taulov was the small village of Erritso, nestled on an estuary by the sea. It was here Peder Christiansen and wife Karen Pedersdatter (also known as Pedersen) raised their eight children (one died in infancy) in the home that once belonged to Karen's father Peder  Michelsen (or Mikkelsen). Soren Pedersen was the youngest of the eight surviving children, born 29 August 1860. He was named after Karen's second brother, Soren (b 1823).  Soren's siblings were Christian Peter (b 1843), Kirsten (b 1845), Peder (b 1848), Laurits (b 1850), Maren (b 1852), Karen (b 1855), and Ane Johanne(b 1858). Despite a change in Danish law mandating the naming of children, Peder and Karen kept the custom of naming their children by incorporating the father's first name. Thus, they were all named Pedersen, not Christiansen. They did, however, abandon the "datter" suffix attached to the surnames of female children- they all became "Pedersens".

We know Peder Christiansen was born in late 1813 or early 1814 and baptized in Erritso, Vejle on February 21, 1814. Records show his parents were Christian Lassen and Maren Pedersdatter. Records of their parentage and ancestry are, at this time, sketchy and not complete. We do know Peder had at least two siblings; older brother Laues (b 1811) and sister Sidsel (b 1819).

While the ancestry of Peder Christiansen was unclear, the bloodline of Karen Pedersdatter could be traced several generations, to her great grandparents Peder Diderichsen and Magrethe Geertsdatter (both born 1719 in Erritso). They had a daughter, also named Karen Pedersdatter, in Erritso in 1763. The elder Karen married Michel Andersen (b 1753 in Erritso) on July 12, 1793.

The younger Karen Pedersdatter (or Pedersen) was the mother of Soren Pedersen, the man who married Georgine Vilhelmine Jansen and came to America in 1888. Their story and the eventful day of their arrival in New York City will be told in the next chapter of this history.