Eastern European Family History Course To Be Offered At The Salt Lake Institute Of Genealogy In January 2014! 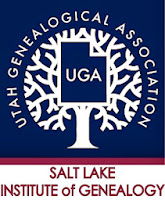 The Utah Genealogical Association is pleased to announce that a bold, new course is being offered at their popular Salt Lake Institute of Genealogy in January 2014. Since 1996 the Institute has been a national leader in innovative education for family historians and 2014 will be no different.

New this coming year will be the first course to specifically focus on the complexities of researching in Eastern Europe. Also new will be some changes in the structure of the course that makes it more responsive to the specific needs of the students who are attending. This innovative approach was conceived by the course coordinator, Kory L. Meyerink, AG, FUGA, who is also the original founder of the Salt Lake Institute of Genealogy.

Millions of people immigrated to North America from the lands between the Baltic Sea on the north to the Adriatic, Aegean and Black seas to the south, leaving family and generations of ancestors behind in Eastern Europe. Three to five generations later, their descendants are finding it very hard to trace their origins due to foreign languages, difficult records and multiple changes in the political landscape. But, now there is hope! This course brings together several of the most successful Eastern Europe genealogists to teach you the important information you need to succeed in such complex research.

Meyerink explained that “In addition to classroom lectures, this course includes hands-on help at the Family History Library as well as break-out sessions tailored to the specific needs of the registered students and their ancestry.” Now, for the first time ever, a major institute is creating specific classes based on a survey the students fill out after they register.

Key foundational classes are planned, which will be followed by several hours of country-specific classes, focusing on what the students have asked to learn about. Currently registered students are already submitting their requests. In addition, there will also be several hours of personal, hands-on help for research at the famous Family History Library.

Director of the 2014 Institute, Christy Fillerup noted that “The instructor list reads like a ‘Who’s Who’ of Eastern Europe research and includes Daniel Schlyter, Kyle Betit, Wade Hone and author Lisa Alzo, among others.”

The Salt Lake Institute of Genealogy will be held at the Radisson Hotel in Salt Lake City from 13 to 17 January 2014. For more details, including the foundational classes, see the description for course 7 at the Institute’s website at www.infouga.org. Early bird registration, for this course only, has been extended to 11 November 2013.

20 countries, 6 teachers and consultants + the Family History Library = One fantastic week for you and your Eastern European ancestors! Don’t miss it!

I would love to attend a session like this but January is a bad month for travel going south of Canada.  Will something like this be offered as an online course?  My paternal family is German with Austrian and Spanish also.  I have been lucky enough to trace Grandfather immigration from Swinemaude to New York in 1893 but having trouble finding grandmother who may have come through Chicago.  Any suggestions as to web sites or books that may help me.  Thanks Helen Pust