Trying the blogging functionality by writing about Chrome OS article

Less than year after Chrome, Google introduces Chrome OS.
The article Chrome OS discusses common misconceptions, warns against some all to easy misinterpreations, points out some easily overlooked facts and a implications, such as what the expected delivery schedule implies for Linux users, provides a brief analysis of the what and why, and discusses how Chrome OS fits in the… Continue

Can Social Media Save Genealogy Societies?

My colleague Elyse Doerflinger at Elyse's Genealogy Blog has started a dialog concerning the future of genealogy societies and how bridging the "technology divide" can mean sink or swim in terms of society survival.

In her post, Elyse discusses many different ways a genealogy society can leverage technology… Continue

6 Steps for Researching Your Family's Genealogy

Many people are interested in researching their family history but hesitate because they are unsure how or where to begin.

These are 6 Steps, which will help the beginning family genealogist lay a foundation to build upon and see rapid progress.

Do not expect to answer all the questions all the time. The further back you go, the harder the information becomes to collect. You will continually add information as you conduct your research. Sometimes, it takes years to find… Continue

There are no words to describe the barbarous levels of inhumanity corporations will sink to, in order to make a dollar.

In the early days of Jefferson County Texas, there were several communities, which have now either been swallowed by the annexation of Beaumont or Port Arthur; or paved over so local businesses could expand.

In 1824, what would become Beaumont, TX was originally just a small community called Tevis Bluff, founded by Noah Tevis. By 1838, Beaumont was… Continue

You find a error in a listing from FindAGrave or another like site, now what?

Have you ever been looking though all of the different web sites with listings of gravesites and marker information and saw one that you KNEW was wrong? What did you do? These sites offer loads of great information, you can find details that may not be available anywhere else. I have found complete families buried together and other relatives I did not know of, buried nearby.
If you see an error, first please be sure it is a error, look down at the bottom of the page or maybe on the first… Continue

Jeff Goldblum: Not Dead Yet

Actor Jeff Goldblum was rumored to have died the same day as Michael Jackson, but reports of his death were greatly exaggerated. His days are numbered, though, so I did some work on his obituary.

Jeffrey Lynn Goldblum was born 22 Oct. 1952 in Pittsburgh, Pennsylvania, the son of Dr. Harold L. and Shirley S. (Temeles) Goldblum. His father (whose obituary may be read… Continue 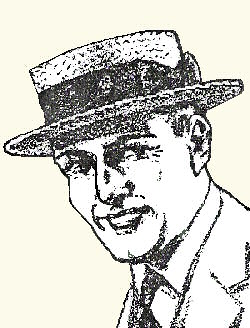 There are many expensive hobbies, genealogy included. I developed my web site, http://ShoeStringGenealogy.com, to help others (and me!) to find less expensive ways to research our family. Online resources are becoming more abundant, but they are not the only ones -- nor should they be -- that you should use.
I have a floating menu on the left that will get you access to… Continue

I had been researching my Harris/Humbert family history for many years, unable to break through the very large brick wall that stood before me. I began to think maybe these people didn't really exist. I was mainly working off of the collective memories of my family after all. However, one day I decided to lay all my paperwork out in front of me and scour it to make sure there was nothing I was missing. I had looked over these pages many times but I just knew the answer had to be there… Continue

Getting an Education in Genealogy

Seeking contact with any other BLOFELD, BLOFIELD or BLOWFIELD researchers

I am researching all occurances of the surname BLOFELD plus variants such as BLOFIELD and BLOWFIELD as part of a one-name study. Please contact me if you have these surnames in your ancestry, I may be able to help with your research.

Have you hit a brick wall in your research? I am sure all of us have a brick wall on a surname at some point or another in our research. I have had several. What do you do about it? How have you broken down that brick wall?

I am seeking contact with other CUMPSTON researchers, world-wide. Please check out my website at www.cumpston.org.uk
and see if any of your relatives are mentioned there. Do contact me if you have any CUMPSTON photographs. Tell me if I can help in your research

A few weeks ago, my mom flew here from Texas, the two of us drove to Michigan to pick up my aunt, and then the three of us continued the drive up further into Michigan. Northern Michigan to be exact - to visit this wonderful woman who just happens to be our oldest living family member!

According to my genealogy program - Irene is my 1st cousin twice removed. Now, after being hit with the genealogy bug for the past 2 years, I still haven't quite figured out that "removed" thing when… Continue

Ask Questions of Family Before It Is To Late!

I started on my quest for genealogy when I was a little girl after getting my assignment to fill out my family tree when I was a member of the LDS Church. I asked my grandmother to help me and when she got to her husband's parents she told me that grandpa had been born out of wedlock and that he was adopted and suggested I add his adoptive father's name as the father. I, being the stubborn little thing I was, didn't want to. I wanted answers. Well, 40 years later, I still don't know my… Continue

You've decided to trace your family history and you don't know the first thing about doing genealogy research. All of us have been there and some of us are still there. I thought I would share with you several websites that will help you learn about this noble undertaking and where to get help.

1. wiki.familysearch.org - FamilySearch Research Wiki is a large, on-line library where you can find thousands of articles and how-to… Continue

For years, I have been attempting to solve the mystery of the centenarian. My grandfather, John Emory Worden, always claimed that a great grandfather of his was a centenarian, and that the family was from Wilkes-Barre. I quickly identified who the centenarian was (John Worden 1741-1842), but was unable to make the connection between my last known confirmed generation (John Worden the civil war soldier) and this man.


The big breakthrough was finding that James Worden (Wordin)… Continue This is part three of my miniseries of Thanksgiving blogs on the immigration of certain ancestors to America, during the week when our thoughts usually rest with our Mayflower passenger ancestors. My 7x great grandfather William Munroe arrived in Massachusetts a little more than thirty years after the Pilgrims settled in Plymouth. His immigration was forced as a… Continue