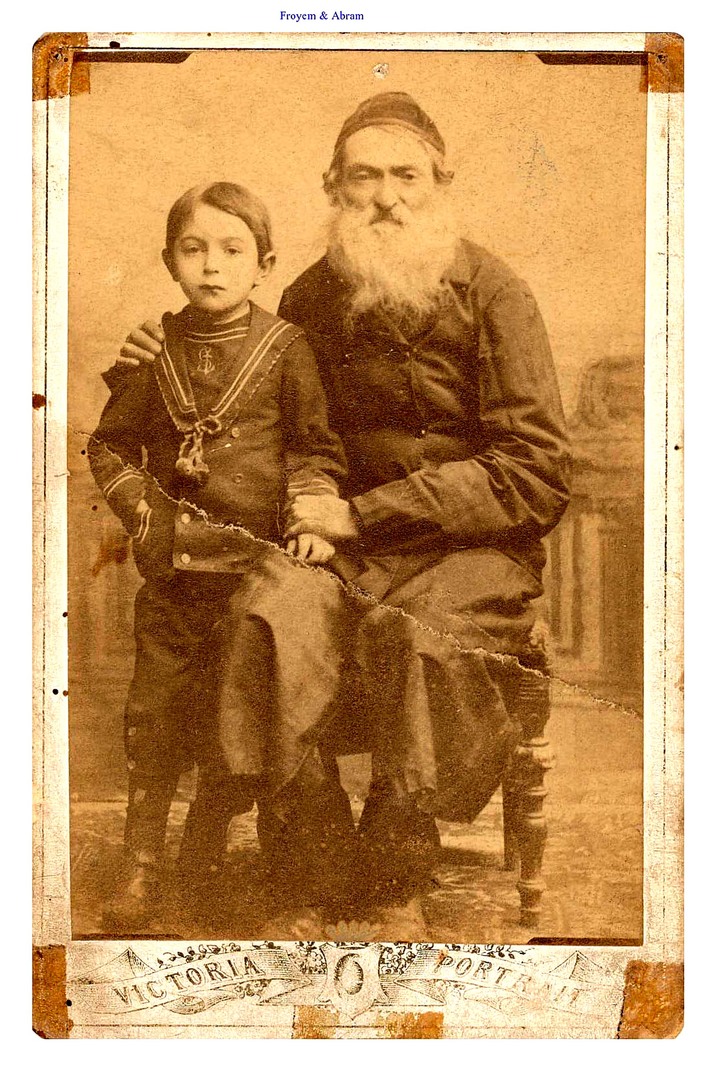 Steve Orlen has not received any gifts yet

Give Steve Orlen a Gift

What countries and other locations are you interested in researching?
Ukraine, Egypt, Australia, Israel, USA

Wolinski Name Meaning and History
Polish, Jewish (eastern Ashkenazic), and Ukrainian: habitational name for someone from Wolin in Szczecin voivodeship or from Wolina in Slupsk and Tarnobrzeg voivodeships, or from the region of Volynia in Ukraine (Ukrainian Volyn, Polish Wolyn).

Wilensky Name Meaning and History
Polish (Wilenski) and Jewish (eastern Ashkenazic): habitational name for someone from the Lithuanian city of Vilnius (called Wilno in Polish).

Willen Name Meaning and History
variant of Wille.
habitational name from a place so named near Wittmund.
Dutch: from the personal name Willin (see Wilhelm).

Note: This source does not mention Wilonsky, Wilentz, Sragan, Shraga and other related surnames.

. . . Apart from these tendencies, the general trend of nomenclature among Jews in the Middle Ages was to adopt that of the countries in which they lived, the given names being often identical with those of the surrounding peoples, and other means of identification being derived mainly from localities or offices. Certain peculiarities of various countries may be taken separately. . . .

Superstitions
It was thought that Jews of the same name should not live in the same town or permit their children to marry into each others' families;[17] this seems to have some reference to exogamy. It is even urged that one should not marry a woman of the same name as one's mother; or that she should be required to change it.[18] Even to the present day it is considered unlucky in Russia for a father-in-law to have the same name as the bridegroom. In other parts of Russia it is considered bad luck to name a child after a living relative. When several children have died in a family the next that is born has no name given to it, but is referred to as "Alter" (Yiddish: אלתר, literally "old"), or Alterke, the view being that the Angel of Death, not knowing the name of the child, will not be able to seize it. When such a child attains the marriageable age, a new name, generally that of one of the Patriarchs, is given to it. For a somewhat similar reason it is considered unlucky in Lithuania to call an only child by his right name.

Hereditary family names developed at different times for different groups of people. The Chinese, for example, had hereditary family names dating back to 4th century, before the Common Era. Scandinavian countries developed mandatory family names as recently as mid-1800s (Kagnaoff, 1977). Jewish family names became more common in the 10th and 11th century as more Jews moved to the cities (Kagnaoff, 1977). The Jews of Spain, Portugal, and Italy had hereditary family names starting in the 14th century.
In 1781 Emperor Joseph II of Austria promulgated the Edict Of Toleration for the Jews, which established the requirement for mandatory hereditary surnames. The Jews of Galicia did not adopt family names until 1785. Family names were then required throughout the Austrian Empire by the year 1787, with the exception of Hungary (Kaganoff, 1977 & Rottenberg, 1977). The great bulk of the Jews in Germany and Eastern Europe continued to follow the tradition of using the personal name plus the father’s name (patronymic system). For example, Yisrul ben Zalman, Avraham ben Zevi (Rottenberg, 1977).

Most Poles had surnames by the 1700s, often 100 to 200 years earlier. On the other hand, most Jews living in the Commonwealth of Poland (which included modern-day Lithuania, western Ukraine, and Belarus) did not have surnames until required to do so by authorities in the 1800s. This means that Jewish surnames were given during a period for which many historical records still survive, so they can be traced back in history more easily. Also, their meaning may be understood better than the surnames that were established before the earliest surviving records.

In the old times, Jews in Poland were named after their fathers (this so- called "otczestwo," or "father's name" was also very important in Russia). For instance Abram, son of Berk was called "Berkowicz" or "Berkson"; the son of "Ezof" was called "Ezofowicz" and son of "Mortka-Mordechaj" was called "Mortkowicz." These fathers' names sometimes automatically were converted into last names. Thus David, son of Abram, was already called David Berkowicz etc.

Many of the above-mentioned surnames were very popular in Poland and the origin of some may not be Jewish. For instance, not all people with the surname "Zieliński" were of Jewish descent, some had their name derived from Polish feast of "Panna Maria Zielna."

Some Jewish names originate from the cities inhabited by Jews. For instance, the name of the famous Russian physicist of Jewish origin, Landau, comes from the small town Landau on the border between Germany and Switzerland. Other names that originate from cities include Morawski, from Morawy (Moravia); Warschauer, Warszawski or Warski (all three names are from Warszawa (Warsaw), the Polish capital; and Krakowski (from Krakow).

Polish Patronymics and Surname Suffixes
by Susana Leistner Bloch
. . . .
Adjectival surnames: Like all Polish adjectives surnames have masculine and feminine forms. If a masculine surname ends in -i or -y, its feminine equivalent ends in -a. Surnames ending with consonants have no specific feminine form.

SKI vs. - SKA. Polish adjectives have different forms for the genders. Surnames ending in -ski are regarded as adjectives, so they , too, reflect gender in different endings. Thus Janowski is the nominative form for a male and Janowska is the same for a woman.

CKI - ZKI Essentially, these are just variants of - ski / ska. Certain words end with consonants that, when combined with the basic ending - ski, produce a pronunciation change. . . . .
Toponymic and patronymic Surnames
Based on origin, Polish family surnames may be generally divided into three groups: cognominal, toponymic and patronymic.
Cognominal surname (nazwisko przezwiskowe) derives from a person's nickname, usually based on his occupation, or a physical or character trait.
Examples:
Kowal, Kowalski, Kowalczyk, Kowalewski - from kowal, or "blacksmith"; or from Kowale" or Kowalewo (Smithville) in case of Kowalski and Kowalewski.
Młynarz, Młynarski, Młynarczyk - from młynarz, or "miller"; or from Młynary (Millersville) in case of Młynarski.
Nowak, Nowakowski, Nowicki - from nowy, or "new one"; or from Nowakowo or Nowice (Newmantown) in case of Nowakowski and Nowicki.
Lis, Lisiewicz, Lisowski - from lis, or "fox"; or from Lisowo (Foxville) in case of Lisowski
Toponymic surname (nazwisko odmiejscowe) usually derives from the name of a village or town, or the name of a topographic feature. These names are almost always of the adjectival form.
Examples:
Tarnowski - of Tarnów
Zaleski - lof Zalesie
Górski - f Góra
Patronymic surname (nazwisko odimienne) derives from a given name of a person and identifies a person's father.
Examples:
Jan, Jachowicz, Janicki, Jankowski, Janowski - derived from Jan (John); or from Janice, Jankowo or Janowo (Johnstown).
Adamczewski, Adamczyk, Adamowski, Adamski - derived from Adam; or from Adamczewo / Adamowo (Adamsville).
Łukasiński, Łukaszewicz - derived from Łukasz (Luke); or from Łukasin (Luketown).
AK-/-EK/-IK/-KA/-KO/-UK/-YK
Suffixes with a -k- generally began as diminutives. In other words, Jan is the Polish form of "John," and Janek or Janko is much like "Johnny." English, however, typically has only a couple of diminutive suffixes, -y or -ie. Polish (and the other Slavic languages) have tons of them. Most have a -k- in there somewhere, or the-k- has been modified by the addition of further suffixes (e. g., -czak, -czyk). As a rule, in surnames a suffix with -k- means something like "little" or "son of.
Thus Jan is "John," Janek or Janko is "little John, Johnny," Jankowicz is "son of little John," Jankowo is "[the place] of little John" (or "of John's son"), and Jankowski is "from the place of little John or John's son.
IAK
Essentially, the suffix -iak is the same thing as -ak; both are diminutive suffixes, but -iak differs only in that it involves softening or palatalization of the root's final consonant. Thus in some names we see -ak added directly to a root with no palatalization, e. g., Nowak, Pawlak; and in others we see the palatalization, e. g., Dorota + -iak = Dorociak, Jakub + -iak = Jakubiak, Szymon + -iak = Szymoniak.
The basic meaning of -ak/-iak is diminutive, but especially , when applied to first names, it tends to have a patronymic significance.
OWICZ or -EWICZ
This suffix simply means "son of." Here, too, the difference between -owicz and -ewicz is of no great importance to non-linguists; some names tend to show up with one or the other, and some show up with both. But the basis meaning of X-owicz or X-ewicz is "son of X.

Howard Wolinsky said…
Is Volhnia a province? Maybe some WOlinskys got their name there.

Howard Wolinsky said…
Steve, Can you invite other Wolinskys to share their name origins.
Remember the Chicago dentist who had a massive list?
Funny thing was his grandfather was an MD who signed my mom's birth certificate. His granddad was Wolinsky became Wolin. He was the tream doc for the Chicago Bears.
Your Wolin was a bitof a wildman, right?

Howard Wolinsky said…
Steve. What do you know about the origin of the Wolin name? Was it Wolinsky? When was it adopted? Where? Inquiring minds want to know.