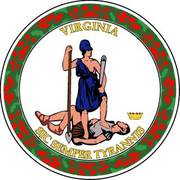 A group for people with roots in Virginia.

You need to be a member of Virginia Genealogy to add comments!

My ancestor, Thomas Attaway, received land in Nancimond, 1690.  Where is the best place to find these early Colonial records?

I should have said that I found the many pages of Martin's pension application on Ancestry.com.

Thanks for the info so far. I'll look into all this and let you all know what I find out. Plus if I need anymore help.

Bob, the 11 pages of Martin Mooney's pension file are available online at Heritage Quest, which many libraries subscribe to, and some of these allow you to access the HQ databases by just entering your library card number.  I too looked through the papers, which include the first page of the letter your posted, and I note that in his pension correspondence of 8Aug1820 Mooney noted that he was "aged sixty seven years since last July" (technically the previous month, but I suppose he meant July of 1819, hence the inferred birth date of July 1752.  The papers include an 1822 deed from Martin and wife Patsey Mooney of AlbemarleCo to Robert Mooney of RockbridgeCo (just to the west over the Blue Ridge) of 60a of their AlbemarleCo land.  This document is the only item in the file that names Martin's wife, and I suspect that it appears in the file for that reason.  I also think that's likely that Robert was this couple's son, even though (a) this was not a deed of gift - Robert is said to have paid $300 for the land; and (b) Robert would have been only 17, since a single unnamed son aged 15 was referred to in Martin's letter of 1820.  Technically, minors couldn't make binding contracts, so could repudiate any deals that they had made on turning 21, but there are exceptions for in-the-family deeds.  Furthermore, this deed includes an unusual provision reserving the use of the land to the grantees for the duration of their lives.  I think, therefore, that this deed was included in the file to provide evidence identifying the members of Martin's family - his wife Patsey, and his son Robert.  Finally, the Richard Mooney, a summary of whose pension records appears on the second page of the letter you posted, showed that he too enlisted from AlbemarleCo at about the same time, so this Richard is probably a brother of Martin.  There should be plenty more about these Mooneys in the records of AlbemarleCo, since Martin appears to have lived there all his long life.

Here's the link to the HQ pension file, though it may not work.

Have you checked the DAR ancestor records?  I just went online and found a Martin Mooney who is credited with service in NC.  Believe the wife was named Patsy.  There is also a Richard Mooney, Albemarle County.  You can write to the NSDAR Library and sometimes get copies of the documentation that was used.

Lisa Winkleman sent me his pension record from 3Fold.  Larry is a cousin of mine who lives in Kansas.

Do you go on genforum? I came across a post by a Larry Mooney concerning your ancestor and his wife.Have you seen it? Do you think the fee site Fold 3 would have more info? I have a cousin who is a member.

Thank you Elaine for your help.

Briefly I've looked around for Martin Mooney.Saw the many pages of his pension application but didn't see a place or date of birth.I found this unusual because my ancestor Ben Alsop was asked and provided those two answers.He got his info from the family bible. What about finding the marriage certificate for Martin and Patsey Gray..that may have a place of birth.I note that Martin's name is linked to Albemarle births in the History of Albemarle Co.Appendix No.4.Could this be a clue? I have put out a query on another Va.site.