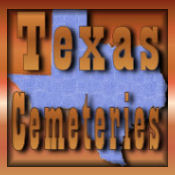 Focusing on research, photography, and preservation of Texas Cemeteries

This group was originally on FB. Welcome old members and new members.

Excellent "How To" on cleaning headstones safely
Wash a stone, restore some history

Any one interested in posting your experiences with cemetery staffers?

You need to be a member of Texas Cemeteries to add comments!

Comment by Sherry Hightower on April 12, 2010 at 7:16pm
Many Thanks to Russell for sending me the story about Texas court aims to protect vanishing court records. This story was part of the TX-Cemetery-Preservation list on Rootsweb List serve so I have added their feed to the group.

✔ The Hardin County Genealogical Society will hold its regular monthly meeting, Saturday, April 10th, 2010 at 10:00 a.m. at the HCGS Library located at 220 W. Main in Kountze, TX. Guest speaker will be Ms. Nancy Brandi from the Liberty Genealogy Society. Her topic will be the "ABC's of Breaking Down Your Brickwall." We will have lunch immediately following the meeting, so bring you favorite dish to share.

Hope to see you there. Comment by Beverly Simpson on November 14, 2009 at 1:22pm
For anyone who might be interested, I have a good friend in Brazoria County who would probably be willing to take cemetery photos if needed. He is a great photographer and will respect all site that he visits.

Comment by James Alfred Locke Miller Jr. on November 12, 2009 at 9:49pm
I descend Mobile and Galveston cotton broker, Capt. Edward Malone, Sr., CSA, 1821-1867, Co. F, 24th Ala., Inf., twice wounded. Earlier he was a Lt. in the Rio Grande Volunteer Light Artillery (Galveston Battery, Van Buren's Battery) under his brother-in-law, Maj. Henry van Buren, CSA. It used guns from the defunct Republic of Texas Navy, and helped capture the "Star in the West". Malone never fully recovered from his war wounds and 1867 was buried Trinity Epis. Church, Galvesrton, near a window. I suppose he buried traditionally six-feet deep, if the then low island permitted that depth? After the Galveston hurricane, I understand eight more feet were added to the island and presumedly, Trinty Church raised back to the higher ground level? Seemingly then, Capt. Malone is now buried 14 feet deep at Galveston's Trinity Epis. Church? That's a question, not a statement. Jim Miller, Southport, N.C.

Comment by James Alfred Locke Miller Jr. on November 12, 2009 at 9:36pm
Luckey is a circa 1830's Rowan County, N.C., family name (possibly of German origins?). Sometimes if stuck, stuck; especially with an uncommon family last name; you find that name earlier, elsewhere; and attempt to work backwards. It especially helps if your's also had some unusually first names too, like Shadrack Luckey, Hardy Luckey, etc. Great grandfather was Biloxi harbormaster Capt. Harry Copp James, born New Orleans, the great grandson of New Orleans lawyer David Copp, Jr., Esq., murdered `1803/5 In a N.O. gambling house. I could not find earlier Southern Copps to connected him too. I'd heard of 1640's Copp's Hill, Boston, Mass. I found a New England Copp researcher--she knew the whole story. A graduate of Philips Exeter Academy, he wed a 15 years old Mary "Polly" Watson at the Epis. Church, Portsmouth, N.H., and the Dover town history book says they fled in the night to escape his gambling depts. A Missisippi descendant, was impeached in U.S. Congress concerning gambling debts and alledged questionable legal decisions. His legislator father, LtCol David Copp, Sr., fought at Bunker Hill; but I most admire him as a Protestant legislator fighting the disinfrangement of Catholics. The father of Sr's wife, Patriot legislator, one-arm Maj. Barnabus Palmer, Sr's wife, descended Gov. Winthrop once, and Gov. Dudley twice. Blacks who can get back to only just before the Civil War, have it harder. Often they need to find the distant origins of their white owners family. For example: my 1805, Ft. St. Stephens, Ala., Thomas Malone, Sr., U.S. Land Office Agent, U.S. Magistrate, Asst. Indian Agent, in an Alabama biography book (Pickards?) is recorded as bringing his slaves with him from Raleigh, N.C.; earlier he had lived Malone's Mill Creek, Warren Co., N.C., the son of Patriot Ens. Wood Malone. Possibly his Mobile, Ala., slaves lineages could be traced back to Warren Co., N.C.?

Comment by Betty Vaughn on July 28, 2009 at 10:10pm
I have photos of most of my family tombstones on Findagrave. Since moving to SC - most of my cemetery photos are in York Co, SC and a few in Cleveland & Lincoln Co, NC. I am finding many tombstones in a cemetery in York County SC that is a gift to genealogist. Women's tombstones with their first name and maiden name as main name and in smaller letters underneath her name, "wife of XXX" and her husbands name. Also as granite was so cheap and plentiful our here... so many babies' tombstones with both parents name.

Comment by Sherry Hightower on July 26, 2009 at 8:43pm
Hi everyone. I am seeking any of you who are cemetery headstone volunteer photographers and who have had to deal with the cemetery office staff, whether a pleasant experience or not, when trying to obtain a grave site location..please consider submitting your experience via a form, on the Cemetery & Funeral Home Reviews site.

Comment by Kaylee Korbitza on July 24, 2009 at 4:24pm
Dichotomy2u,
I am not finding Martha Patsy Parker Cross Crenshaw in any listings I have for Pilgrim Cemetery. That's not to say they aren't out there, just that we haven't seen headstones or certificates to prove it yet. In fact, the only members of the Cross family out there that is listed is John H. Cross (b1860 - d1895) and Nihle P. Cross (b. 6/21/1907 - d. 2/14/1982) There are no Crenshaws listed at all in the entire county! I checked every spelling I could think of too. I'll do a little more digging, but from the looks of it now, I don't know if there's going to be anything at all on them. Sorry!

Comment by Dichotomy2u on July 22, 2009 at 6:19pm
Kaylee,
Do you have any info on the death of Martha Patsy Parker Cross Crenshaw? She is daughter of James W Parker. Her son, daughters and neice and father are all buried at Pilgrims cemetery, but I cannot find Martha or her son Daniel J Crenshaw. Martha died between 1911-1930. Thanks!