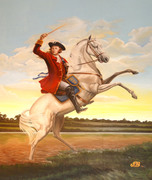 An American ethic group of those who think their ancestors were Scottish Protestants living in Ulster. Our challenges: researching in colonial times, crossing the Pond, researching in Ireland. You can do this, but need to learn how. It is not easy.

Searching for The Glavin Family of Ireland 1 Reply

I am lookin for any information on my maternal grandmother. Her name was Ethel Glavin and she came into Ellis Island with her parents as a child. I do not know her parents names, but she had three…Continue

Martha Lairdcame to America with her brothers and sisters in the early 1730's onboard the same ship with Samuel Harris, who became her husband soonafter landing in Pennsylvania.  Later they moved to…Continue

I suspect that  a couple of my family branches ended up in,North Carolina, and Kentucky.  McNay and Young,  Jamieson and Paterson (MYJP).  My Branches are from the Ballywalter area of County Down,…Continue

You need to be a member of Scotch-Irish to add comments!

Welcome to the Scotch-Irish group. There doesn't seem to be too much activity here yet, but maybe we can change that. What surnames are you researching?

Comment by Melanie McLennan on September 16, 2011 at 12:32pm
I'm researching Canadian Scots-Irish connections as well. It appears that many of the Scots Irish who were loyalists chose Canada and other Commonwealth countries as their preferred destination after the Revolutionary War. Upper Canada/Canada West (Ontario) was a prime choice as it was not as far as Australia, South Africa or the Caribbean and it was predominately English speaking and Protestant and land grants and patents were afforably available.

Hi all, I am research my ancestors who came primarily from Ballymoney (Antrim or Derry). The surnames I'm researching are Torrence (or Torrens), Hood, Plunkett, and Sterrett (or Sterrit). They settled in Prescott, Ontario, and Brockville, Ontario. Is anyone else doing research on these surnames? Any help is greatly appreciated!

Comment by Russell Juhl on April 17, 2011 at 11:08am
I am interested in tracking the Kerr and Morton ( around 1770 ) from Ulster to western Pennsylvania (Washington County).

Philip's brother was Maj. Henry Yonge, Jr., Loyalist, H.M. Attorney-General of British East Florida, who as such annulled 1,000 indentures of wrongfully enslaved New Smyrna Beach, Florida, Menorcans; and commanded a company of them at Ft. St. Augustine, Florida. Possibly Philip was there also.

Comment by Ellen Rowan Taylor on March 6, 2011 at 1:22pm
I am researching Henry Rowan and Thomas Latta who both settled in the Manor of the Maske in the mid 1700's-Henry in 1739, and Thomas either in 1739 or 1765, in what is now Gettysburg PA.  The Penns sent a group of Scotch-Irish settlers out to that area, without their usual treaties with Indians, and whatever else they did.  When the surveyors came to do their job in the 1740's, the settlers refused to let them do their work.  Neither Henry nor Thomas are listed as the men who attacked the surveyors, but I assume they were both from Northern Ireland, but I can find no proof.  Has anyone had any luck finding proof from that far back?  I can't even find obits that tell me anything.

Comment by Libby McCann on March 6, 2011 at 12:46pm
I am researching the Blair's, Baird's, and Mcgough's all are Scottish/Irish.

True story: Three decades ago I was on the train from Glasgow, Scotland, to Ft. William. I sat beside an old lady who asked from whence I came? I told her North Carolina and said my Cromarty, Scot ancestor was Capt. Wm. Mackenzie; in 1771 H.M. Comptroller and Collector of Customs, Sunbury, Georgia; who's daughter Christian Mackenzie, wed Loyalist Capt. Philip Yonge, H.M. Surveyor-General of Georgia. The old lady thanked me for being an American who said "Scot", and not "Scotch". "Scotch is a drink!", she snorted. No, I did not say: "I'll drink to that."

After a while, I sat beside another old Scottish lady who talked and talked about her "Scotch" ancestry. Go figure?

Supposedly William perished aboard ship in a hurricane, but 1746 he put into now Wilmington, North Carolina, up the Cape Fear River, before Sunbury. In 1752 he was a partner a Wilmington (New Liverpool) firm with Francis Davis, and a New Hanover County militia captain. He died Savannah  at Sabine's Fields. In 1781 his widow Sarah was yet alive. His other daughter, Anna Jean Mackenzie wed John Simpson, Jr., H.M. Chief Justice, Member of H. M. Council, and Crown Clerk of Court, Georgia. His brother was James Simpson and their father was the Hon. John Simpson, Sr., Chief Justice of Georgia.

Mrs. Christian Mackenzie Yonge's brother-in-law was Maj. Henry Yonge, Jr., Loyalist, H.M. Attorney-General of British East Florida, who as such; squashed the abused indentures of 1,000 wrongfully enslaved New Smyrna Beach, Menorcans and with Philip, commanded a company of them at St. Augustin, in the rebellion. His plantation is now Ormand, Florida; it's library there, on Yonge Street. Their father was the Hon. Henry Yonge, Sr., Loyalist, H.M. Surveyor-General of Georgia who called his first wife, Christiana Bullock, "a rebel". She was the sister of Patriot, Gov. Archie Bullock. The brothers descended second wife Elizabeth Bellinger, the grandchild Capt. Edmund Bellinger, Sr.; master of the "Blake" which brought the first cattle to South Carolina, Judge in Admiralty, Surveyor-General of S.C., and 1698, Landgrave of Tombodly Barony, and Ashepoo Barony, S.C.