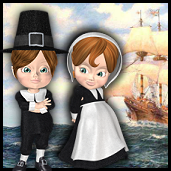 This group is for those interested in the specific era of seventeenth century New England, including pilgrims, puritans and non-religious settlers

I actually have Four Mayflower Compact signers as ancestors! 2 Replies

What are your links in the Pilgrim Era? 42 Replies

You need to be a member of Pilgrim Era Discussion to add comments!

Comment by Liz Loveland on February 14, 2010 at 4:16pm
Hi Joan,
I'm sorry it's taken me so long to get back to you - I just realized today that I'd thought I'd answered your comment already but hadn't. My direct Hubbard line disappears in the first generation in New England. Samuel Hubbard, an emigre from England to New England (initially Salem, MA), married Tacy/Tasy Cooper (also an England emigre) in 1636 in MA. Histories say that they were both amongst the group that walked to modern-day CT to found it in 1635. They moved on to RI and eventually co-founded the Seventh Day Baptist Church in Newport, RI in 1671, the first branch in the Colonies, which appears to be the main reason so much more has been written about them than most of my other early settlers. (Some of it, in particular the assertion that Samuel's grandfather was burned at the stake in England, appears to be inaccurate, though.) Their daughter Ruth Hubbard, who was born in what became Springfield, MA (originally Agawam) and was the first white child born there, married Robert Burdick in RI in autumn 1655 when she was just 15. They had a very large family (as I'm sure you know was common then) and my direct ancestor is their son Hubbard Burdick, who was born in 1676 in Westerly, Washington Co., RI, and married Hannah Maxson in Westerly in 1714. My direct line (their grandson James) moved up to Canada after the War. There are a bunch of historical quotations about James up at a page of the Burdick surname newsetter: http://www.burdickfamily.org/newsletters/news0804.html

The Hubbards and the Burdicks were both big clans. It appears Burdick was an unusual surname in early New England, but I'm not sure how common Hubbard was.

Anyway, as to your other possible match:

My Williams is Keziah/Cazia Williams, who was born in 1686 in CT and married John Loveland in what's now Glastonbury (then part of Wethersfield), Hartford Co., CT in 1708. Public genealogies list her parents as Thomas Williams and Hannah Hogg, but I haven't done as much research on her as on most of the people in my tree yet, so I'm not sure if this is correct info.

However, two in your list rang bells for me, about whom I know almost nothing.

Hubbard: I have a Willliam Hubbard (1727-1771) m. Mary Peck (parents unknown) in New England bef. 1754. Their dau. Mary m. 1st. Oliver Burr, descendant in the CT Jehu Burr line; m 2nd Ebenezer Judson White of Danbury CT, descendant of both Capt. Thomas White, Weymouth MA and Edward White of Dorchester MA (both these Whites b. in England). William Hubbard's father was supposed to be Isaac Hubbard (1693-1771 CT), husband of Bethiah Goldsmith (1698-1770 CT?), dau of Thomas Goldsmith and Bethiah Terry. However I cannot seem to track this Isaac very well. Do you know him or any of these folk?

Williams: I have two Williams, with the "useful" first names of Robert and Thomas.

Thomas Williams I first meet in Long Island as husband of Mary Willets there.

Comment by Liz Loveland on February 7, 2010 at 12:49pm
Hi Joan, Like most people who try to follow collateral lines in addition to direct ancestor lines, I have heaps of surnames in my files. :-) Here are some of my other 1600s New England surnames that I've done the most research on so far:

I've also been searching for ages for a family that I think is an old New England family, based mostly on my instincts, but I've been unable to trace them. Stratton/Stratten Rowel/Rowell came to Ontario (Upper Canada then) with the Burtch/Birch/Birtch family (his wife Olive and her parents and some of her siblings) after the War. (Originally they went to Bur[t]ch's Landing, Niagara, and then Stratton and Olive were the first settlers in Zorra Township, Oxford.) Some records in Canada say he is from Connecticut, but I've been unable to locate him in CT. A couple secondary sources I have found state (without any citations) that he is from Upstate NY, but that idea also led nowhere.

Comment by Liz Loveland on February 7, 2010 at 12:04pm
I really enjoy going to the old graveyards here in the Boston area. I've taken some photos for FindAGrave. If anyone has anyone they'd like me to search for in a graveyard here, please feel free to message me. (Note: I use my feet and public transit, so completing your request would be dependent on being able to walk or take transit to the cemetery.)

Comment by Liz Loveland on February 7, 2010 at 12:02pm
Hi everyone, Many of my ancestors originally settled in 17th c. New England. My surname line (Loveland) settled by the Connecticut River (near present-day Glastonbury) in Connecticut in the early 1600s, and moved on to Vermont just after the Revolutionary War. Some of my other lines settled originally in CT or eastern MA. The MA lines date from the 1620s-30s, but moved quickly on to RI, apparently for the greater religious freedom, and later moved to Canada. The other CT lines moved to Canada after the War.

Comment by John Scott McKay on January 10, 2010 at 10:00am
Myles Standish was not a Pilgrim per see he was a military man. Scott

Comment by John Winner on December 31, 2009 at 12:21am
Boy, it seems like only pilgrims came on the Mayflower, where are all the folks with links to the Fortune?

Comment by Christine Elaine Law on December 30, 2009 at 10:35pm
I have recently just started researching my genealogy and so many are from this era and from Virginia, this is so fascinating to me!

Comment by Heather Wilkinson Rojo on November 24, 2009 at 7:50pm
I hope all you Mayflower descendants have joined the Society! If you have questions about the application process, please ask me.