John Orien is on record as being 1/4 Cherokee. He worked in the Bureau of Indian Affairs and attended the Haskell Indian School, so he had to be Indian. I can't find our full-blooded Indian. It should be Lucinda's mother. BUT, her father had 3 wives. I think Lucinda's mother is Fannie ARRENDUFFS, but I'm not sure. The other wives were Martha MAPLES and Cynthia CARTER WILLIAMS.
The only records I've found are William J. Murray's death certificate and a very short death notice with no information. The dates I have come from other people online and I'm working to verify them.
William's death cert. says his father's name is John born in Tennessee. I have (from someone else) that his father's name was George Cliency Murray. Mother was unknown.

Where did the Murrays come from? Where in Tennessee? Who is the Cherokee family member? So many questions.

Permalink Reply by Lisa Frank on July 22, 2009 at 9:14pm
Alison -
Did you mean that Mary Jane's father had 3 wives, and Mary Jane's mother is Fannie Arrenduffs?

Our family is 'rumored' to have Cherokee blood as well; in our Murray line, but it is a brick wall for me (which is why I say "rumored").

Yes, MaryJane's father was married 3 times. MaryJane would be the full-blooded Cherokee, most likely coming from her mother. I think that's Fannie Arrenduffs, but not sure.
The Cherokee blood is a fact for us. John Orien Crow (my great uncle) couldn't have gone to the Haskell school if he wasn't. My grandmother wouldn't discuss it. Her sister apparently enjoyed it, dressing and decorating with many Indian items. Proof has been very elusive.

Where are your MURRAYs from?
Good luck,

Somehow I missed this -- I need to go back and make sure I'm receiving emails for all posts. Sometimes I do... sometimes I don't.

To answer your question, either VA or KY - I have not figured it out yet. I actually know only of one Murray in my line so far - my g-g-grandmother, Eliza C Murray b. Jul 1878. She married William Robert Cole around 1894 and had three children: Inez V. Cole, Fleming F. Cole, and Eliza C. Cole. According to the one census I find her on (1900, Black Walnut, Halifax, Virginia), she was born in Virginia, however a census that my g-grandmother appears on indicates her mother (Eliza) is from KY.

The info in the family is that our Eliza Murray is either half-blood or full-blooded Cherokee. I have not been able to prove this.

I received information from another researcher that this is William H Murray and Louisa Y Buntin, but I still have no proof that it is, and if it is WHM and LYB then I have no proof that their Eliza C is also my Eliza C. (does this make sense?). The confounding matter is that this researcher traced the Murray's and Buntin's quite a few generations, and had no indication of Cherokee blood. There's also no indication of a KY residence. So I'm not convinced this is the right family for my Elisa C. Murray, or if it is, that this Elisa Y is not actually Louisa T Buntin.

I should copy/paste this to the brick wall page. LOL I think I might...

Permalink Reply by Alison Morton on July 1, 2010 at 9:36am
Hi Lisa,
It's been a year. I seem to only get to genealogy work during the summer (I'm a teacher). Here is what I've recently found on Robert and Lula. I posted it to the Most Wanted group yesterday, but I thought I'd add it here, too.

I've located them in the 1880 census in Clay, Lafayette, Missouri.

Another connection I found was through Robert and Lula's daughter Sallie. She was listed in the 1900 census in Hooper, Costilla, Colorado with Robert. There was a Bellie BLACKWELL (Bellie HACKETT) living with them. She is listed as Robert's sister-in-law. So Lula had a brother. (I'm assuming HACKETT) is her maiden name. Again, an assumption, not verified fact.)

Lewis Sanders, listed on the same page of the 1880 census is Robert's father.

On the 1900 census, Lewis T., who is living with Robert and children, is listed as Robert's nephew. 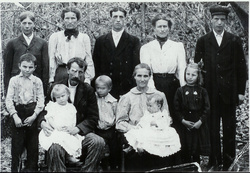 Grave site of Peter J. Skiles and Martha (Brown) Skiles in Mount Herman Cemetery in Dent County. There are a lot of Skiles buried there. The family photo is of Lorenzo Dow and Martha Ann (Skiles) Shipp and their children. My grandma Iva Nelson is the baby.

Permalink Reply by Regina Lynn Williams on October 28, 2009 at 1:16pm
Hello Lisa, I don't know if this will be of any help to you but my G-Gandfather from what I can tell moved from W.Va., Ohio, Ind, and Ky. From what I've been told but not sure of yet, that he move in with some of his family after my G-Gandmother died. She died in W.Va and he died in Lyon, Ky. I would love to talk to anyone that may have some info on this family. I don;t know who his mother and father was or if he had and brothers or sisters. Regina

My Grandmother was Iva (Shipp) Nelson. She always told me her mother Martha A. (Skiles) Shipp was 1/2 Cherokee and that Martha Ann (Brown) Skiles was full blooded. We have no idea who Martha's parents were. There are no known records. When I was young Grandma told me not to tell about it because "some people dont like Indians." I have recently stumbles onto the Murrays and Crows on Find a Grave and am interested in what kind of proof John O. Crow had to get into the indian school in Lawrence Kansas. My mother Karen Nelson has contributed some Ship and Skiles information/ photos on Find a Grave.

Permalink Reply by Rosemary Taylor on August 9, 2009 at 9:45pm
Hello. I have Telitha Sanders married to John Smith (b. 1808, KY) in Phelps County, MO, and I believe there are Skiles related to their descendants. But, this is not what cause me to reply. Have you ever considered researching Cherokee County, Kansas, across the stateline from Miami, Ottawa Co., OK. There are Murray there. Pence Cemetery, a little, old cemetery near the stateline east of Baxter Springs has Murray graves, as does Galena. Williams is also buried there. I have been told Coral Williams married a Cecil Crow as a 2nd husband, but I have never been able to find a record. They are not my direct line, but it would add to my Williams research. I thought maybe you knew of them. My father used to speak of a friend named Maples. There is a nest of old settlers of the area. It was called Tennessee Prairie. My cousin used to research Murray.

Permalink Reply by Judysanders on April 21, 2010 at 1:15am
Hey Cousin, This is Judy Sanders. Robert Joe Sanders daughter...I would like to see what all you have if you don't mind? I love finding about my family...I would also love to talk to you...JUdy