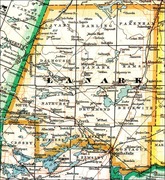 For everybody who can trace roots to ye old Lanark County, Ontario. Whether your roots in the county are just recent or if you can trace yourself back to the Lanark Society Settlers, come on in!

You need to be a member of Families of Lanark County, Ontario to add comments!

Nancy, I've put a quick family tree for Mary's line(s) online. Some entries will display as private and I'm not sure how to change that right now, but you'll have a good idea of how many descended from Mary from both marriages. If you click the little blue/pink boxes connected to her "bubble" it will expand out to show her Burns and Skiffington marriages. If you send me your email address I can provide more detail than what I managed to put online so far.

I'm descended from Mary Ann Roberts, daughter of James Roberts and Rachel Barry. Her first husband was Walter Burns and I am descended from their oldest son Walter Burns who married Elizabeth Dougherty. Mary Ann, when widowed, married the next door neighbour's son James Skiffington, who was younger than her. Does anyone know how many children Mary Ann and James Skiffington had?

Comment by Robert Burns on May 24, 2014 at 12:48pm
Margaret, which of John Burns and Margaret Skiffington's sons was your Grandfather?

Mary Anne was my GGGrandmother with her marriage to Walter Burns.  I must look into her second marriage.  Their son John Burns then married Margaret Skiffington whose son was my grandfather.  Are you able to provide more info on Mary Ann's second marriage.

My GGG Grandmother was Mary Anne Roberts (b.1821/d.1886), married to Walter Burns and then to James M. Skiffington. I'm a descendant of her Skiffington line.

Just came across this site while researching my paternal family. I've traced my roots back to Peter McGregor (b. 24 Mar 1793 in Bonhill, Dunbartonshire, Scotland to Duncan McGregor and Katherine McColl). Peter and wife Elizabeth (Christian) Smith along with two sons (Duncan - 3 and James - 1) arrived on the Earl of Buckinghamshire in 1821 as part of the Paisley Townhead Society and claimed Lot 13, Ramsay Conc. 10 on 31 Aug 1821. Four more children were born, Peter (1821), Elizabeth (1826), John (1829) and Alexander (1831). Alexander married Mahali Brydges 11 Jun 1853 and they are my Great Great Grandparents. My family stayed in the Almonte area down to my Father who moved to Nova Scotia after WWII to marry my Mother.

I would certainly be interested in hearing from anyone who has connections to the family through birth or marriage. Connected families include Brydges (Bridges), Thom and Cochrane. Thanks Robert for establishing this group.

Bathurst Courier - Newspaper - Perth, Ontario.
27th July 1847 - at Lanark, on the 3rd instance, Mr. Andrew McBeath, in the 103rd year of his age.  He was born in Sutherlandshire, in the memorable year 1745.  At the time of his birth his father was absent in the army of Prince Charles Stewart, who on his return home after the defeat of that Prince, was presented with the subject of this notice, then three months old  He was for many years Forrester to the Duchess of Sutherland; subsequently he removed to Glasgow, where he resided 10 years previous to embarking for this county with the Society Settlers in the year 1821.  For several years after his arrival and settlement in Lanark, few of his neighbors could use an axe or a handspike to better advantage than the deceased, although on the verge of four score years of age - but the strength of his arm has been broken - "the strong men have bowed themselves; the grinders have ceased, and those that looked out of the windows are darkened."
Because he has gone to his long home, and the mourners lament his departure, but their grief is mixed with consolation, for he gave pleasing evidence that for him to die would be gain.  In the 101st year of his age he added his name to the Temperance Society in order to encourage others to go and do likewise.

In 1862 at age 51 he moved his family to Helena Twp, Antrim County Michigan, USA

Decended from William Gordon that came to Lanark in the fall of 1820 from the Abercrombie friendly society. Nice to be in touch with other Lanark society settlers ;) Cheers, Bill

I too have the Lanark Era books - what a wonderful resource. They helped me immensely!!

Love to chat with you, Robert