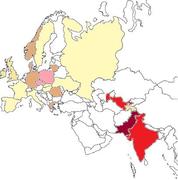 This haplogroup is quite controversial today with opposing views on it's origin(s). One side sees it as Central Asia and another sees it as India. There is quite the debate in the scientific community. There are also few subclades of this group, which is a stark contrast to many in R1b.

R1a1 (now R1a1a) is supposedly the haplogroup that domesticated the horse and spread the Indo-European languages. This may be contested as new subclades and ancient DNA information is being revealed.

I myself have ancestry from Poland (a stronghold of R1a's) but my closest match on Ysearch.org at 67 markers is from India with a Genetic Distance (GD) of 14. Despite the distant timeframe for Most Recent Common Ancestor (MRCA), I contacted this person and found out that he was confused about having his closest match from Poland. Since then and we have become great friends - very very distant cousins - that both live in the US.

I originally didn't think too much about a distant connection to India, until I was in a Polish deli and as I started speaking Polish to the clerk, when a lady nearby looked at me and told the clerk that I didn't LOOK Polish. I told her that I was indeed Polish. Or was I? My genealogical research has only gotten me back to my great grand father in Poland, but I don't know much about him but his name.

My lower resolution 12 marker matches are all over Europe -England, Germany, Poland, Greece, Italy, Denmark, Norway and France and there may be what could be a remnant migration route. But what about India? The highest percentages of matches or near matches at low resolution are from Pakistan, Tajikistan and India. But low resolution may be well outside of a genealogical timeframe and maybe just hints at the past (See map image above).

I invite anyone to provide comments and especially wish to hear from other R1a1's. My journey so far into genetic genealogy takes up a good portion of my spare time as a biologist, but has made me feel more confident, outgoing and outreaching than ever before. I've enjoyed the GG presentations I've given at conferences and hope that more people will test to discover their ancient past and potential lost relatives.

I just joined.  I am the admin for the Farrar DNA project, www.worldfamilies.net/surnames/farrar/resultsI am in haplogroup R1a1…Continue

You need to be a member of Haplogroup R1a1a to add comments!

Interesting. My Haplogroup came out to be R1a1a - M198 and I am of Indian origin.

I had my brother test for me through 23andMe and he came back R1a1a. Our earliest known paternal ancestor is Jan Dziemianczyk from near Bialystok, just over the border into what is modern-day Bialorus. The family self-identifies as Polish. Are there any good calculators that work with 23andMe for Y-haplogroups?

On my 37 Y-DNA test was found out the next DNA Information:

Hello Andre, I suggest that you have some SNP tests done, if you have not already to determine which branch of R1a1a you are in.  Some R1a1a's are not Slavic.  If you test positive for marker L458 then you are truly central/eastern European.  Here is the link to the R1a1a and subclades project at FTDNA.  If you tested with them then join the group.  http://www.familytreedna.com/public/R1a/default.aspx

If not, then get back to me.

I'm Andre Hammann from Brazil, my Y-DNA Haplogroup is R1a1a, my ancestors were originally from a village near Breslau (Wroclow) called Waltersdorf, Silesia, Prussia. They were german speaking immigrants, named Wilhelm Hamann and his wife Pauline Graupe from Klopschen, Liegnitz, also Silesia.

It is curious to know that even thinking that my ancestors were german, because they spoke german and have german lastname "Hamann", in real that are from slavic ancestral origin, something that I found out after doing my Y-DNA test. And the region they were from was always a german-polish bordery change, it reflects exactly from were they were from.

I'm interested to learn more about Y-DNA results, I still researching about my ancestors back to Silesia.

Have a great day!

True the Y DNA projects seem to be making discoveries, in part because individuals are interested enough to do the "walk the Y" or whatever it is called, I might be mistaken, but in this case it seems almost the amateurs are trumping scientist for discoveries; it seems fully confirmed "Old Scandinavian" Y haplogroup holder, like myself might be less than 10-20.

Sorry folks! I need to get back into this site again and answer your questions as best as I can.  I do suggest that if you are R1a that you should check out R1a1a and Subclades at FTDNA becuase they have a number of SNP's (single mutations) to test for to determine your subclade or subgroup!  Plus they are providing geographical and ancestral group connections.  here is the link http://www.familytreedna.com/public/R1a/default.aspx

I have just been tested at 37 markers as R1a1a, one of around 10 Fergusons on FT-DNA with this group, and the only one whose known ancestors (back to 1766) are English.

Currently awaiting the outcome of an upgrade to 67 markers.

There is a very good R1a1a chart on FTDNA R1a1a and subgroups. I tried to paste it here but failed. Perhaps you can copy and paste it here.

well almost forgot about this group, Dr, McD confirmed some S. Asian DNA on chromo 7, but I am now "Old Scandinavian" being pos. for Z287 ans Z288 I think.