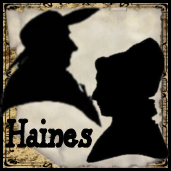 This group is for any and all descendants of Richard and Margaret (Leeds) Haines and anyone of the surname Haines who is still searching for their ancestors.

Looking for information on the ancestry for Rebecca Haines. Her first husband Jeremiah Johnson died about 1756, New York. Their children were Henry, Jeremiah and Nancy all born in New York city.…Continue

In his letter dated may 5 1866, George Haines states that Indian traits are only showing up in the male descendants of Mary Carlile. And that the female descendants show no sign of Indian blood. But…Continue

Are you stuck someplace in your Haines line? Post the details here, maybe someone else can help.

My Dad (Lewis D. Haines, II) is a direct descendant of James Haines of Salem, MA and Southold, LI born about 1613 and died 1652 in Southold, L.I.At the 67 marker on Y DNA he was matching a lot of…Continue

I have spent the better part of the last year attempting to determine the ancestry of Richard Haines and after many long nights I believe I may have solved the riddle. I now believe Richard Haines of…Continue

Do the Haines Families in America Have a Common Ancestor? 6 Replies

Is there a common ancestor of the Haines families in Germany? I have been wondering about this, the John Haines family of Massechusetts came to America about 1635, some of whom were captured by…Continue

I am interest in knowing more about my Great Grandfathers. I am a direct decedent of Hiram Haines and Oakley Philpotts Haines and would love to know more about them. I know it's a long shot, but I…Continue

This is what I have come up with.Continue

Richard Haynes was the son of John Haynes and Elizabeth Stanford of Sussex England. But He was not the grandson of Gov. Haynes as was previously thought. Gov. Haynes' 1st son John (1617-1638) died…Continue

You need to be a member of Haines Family to add comments!

Comment by Katrina Haney on July 10, 2009 at 10:17pm
Earline this is cool. I would love to see more of what you have. These are not my direct line, but I also research the peripheral lines. Thank you for sharing.

If my Haines's married into your Doan's then they are still yours too ;)

Comment by Earline Hines Bradt on July 10, 2009 at 10:01pm
I ddid a lot of research on your Haines family before I found out I was researching the wrong family. I found out that some of your family came to Ontario after the Revolutionary war and married into my Doan family. My Haines family were not Quakers, they immigrated from Germany to Johnstown, in the Mohawk River valley and leased land from Sir William Johnson. My 4th greatgrandfather, Joseph Haines, Sr. was in the Niagara region at the same time as your family member, Joseph E. Haines, Quaker, born in New Jersey, I also did research on the Godefroy Haines family from Rye, Westchester, New York, some of whom were also Loyalists in Upper Canada.

Comment by Katrina Haney on July 10, 2009 at 9:13pm
The story of Richard and Margaret Haines

Richard Haines, the progenitor of the Haines family that Settled in the Burlington COunty area of New Jersey, unfortunately never made it to see the new land. Having embarked with his family, including a pregnant wife, at Gravesend, England, on the 'Amity,' they sailed from Downs, England, for West Jersey, on April 23, 1682. The trip was long and tedious, as was common in the days of sailing ships.

The "Amity" was a slow-moving sailing vessel of the type then prevalent. Her captain was Richard Diamond, a veteran, whose father had been a captain before him. In her hold, the "Amity" carried various commodities which were assured of a ready sale in America-dried beef, silks and satins, rum and tea.

No premonition of impending tragedy presented itself as the ship, her sails billowing to the breeze, slowly moved away from the dock, while friends of those on board shouted their last farewells and wished the travelers "bon Voyage."

Sailing ships in those days, were at the mercy of the elements and shortly after leaving England a storm of great intensity swept from the west and engulfed the ship. As the night wore on the waves mounted to gigantic proportions and soon the ship was completely off her course.

After weeks, during which the "Amity" valiantly fought her way across the ocean, provisions ran low. The women and children were given preference in the matter of the little remaining food while the water, much of which had become fetid and germ ladened, was rigidly apportioned so that it would last until land was reached.

Then, when all danger seemed to have been averted and hopes had again taken the place of despair in the minds of the voyagers, Richard Haines was suddenly stricken. His wife, Margaret, was unable to assist him and he lay for days in a stupor.

His children, crowding about him, prayed that he might get well but Fate decreed otherwise and he died while the ship was still many miles from the coast.

Saddened by his death, certain of the passengers, staid by the bedside of his wife, while the ship lurched in the troughs of waves seemed intent upon adding to the misery and suffering the circumstances had produced. A few hours later her child was born.

A few days before the ship made port the baby was christened Joseph in the presence of the passengers and members of the crew. Even during those trying days, when only a little food remained, the Christian spirit of those hardy pioneers was manifested by the intensity of their prayers and the deeply religious spirit portrayed during the christening.

Comment by Katrina Haney on July 10, 2009 at 8:40pm
Welcome to the Haines Family discussion group. If you join us, please leave a comment letting us know if you are a known descendant of Richard Haines, or still looking.