From Lithuania to Scotland

This is my first post to Genealogy Wise. I'm interested in tracing as much information as I can about my Grandparents, who came from Lithuania to Glasgow around 1905.

They very possibly came from Sunskai in the Suwalki Region, and birth dates are respectively listed as December 1882 and 1883.

I've had the usual issues in trying to find a definitive surname spelling, with the most likely being Bujauckas/Buyauskas or Biuauskas for my Grandfather and Kaminskeine for my Grandmother ( I've been told that this spelling may indicate that she was previously a widow as otherwise her maiden surname would be Kaminskaite).

I'm not sure what else I can do from Scotland (Poor Relief-shown in the photographs/Valuation Rolls/1911 Census and Register of Births, Deaths and Marriages have been examined) and, pending assistance from a researcher in Lithuania, I'm also awaiting word from the Royal Highland Fusiliers Museum in Glasgow re my Grandfather's service and personal details. I though this may be worth a try as he chose to enlist in the Highland Light Infantry in 1917 as an alternative to forced repatriation to serve in the Army of the Provisional Government of Russia.

Strangely, at present I find myself teaching an outreach class in a school in Baltic Street, Glasgow, on a Friday morning: the same street that they lived in from arriving in Glasgow until they died.

If anyone has any suggestions re accessing other records such as likely port of entry or alien registration information or if they have a similar family background, I'd be delighted to hear from you. 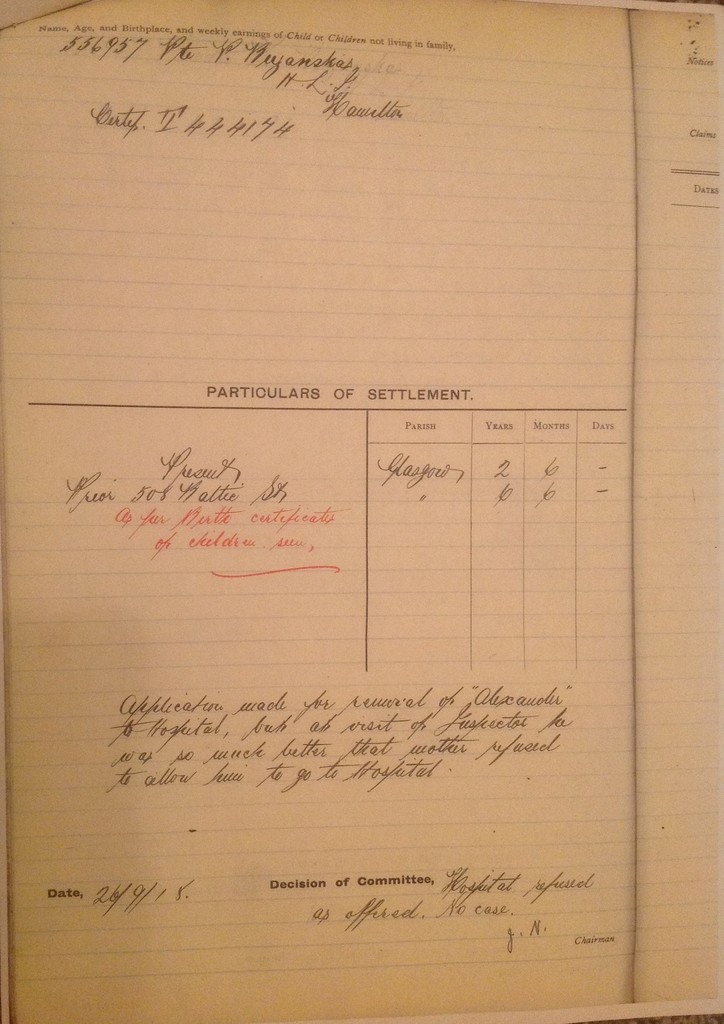 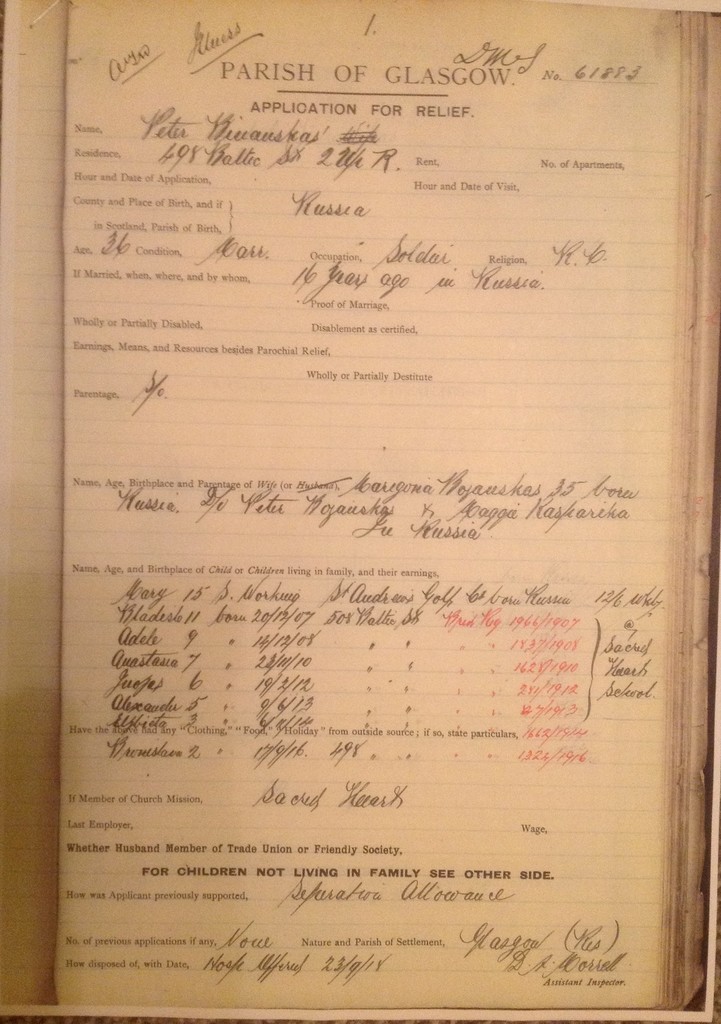 Permalink Reply by Anita Adamitis Scarborough on March 28, 2017 at 3:02pm
The surname is apparently Bujaukas. If Šunskai is correct church records for that parish are available online at http://www.epaveldas.lt/vbspi/simpleSearch.do

I noticed that on find a grave there is a Motiejus Bujauskas who died in 1918 and is buried in Shenandoah Pennsylvania with his wife. Many early Lithuanian immigrants went to this area, and many in particular were from Suwalkia. https://billiongraves.com/grave/Motiejus-Bujauckas/6525270#/

Try to find immigration info on him, I will look too. This is a long shot, but perhaps they came from the same area. You need to find someone who can search epaveldas for you to find marriage and birth records. Anita

Thank you very much for this Anita. I was told by a cousin that their eldest child, Marijona (Mary on the form), who was born in Lithuania before they left, used to say that her father got on the wrong boat. It was seemingly not unknown for emigrants to be told that they were going to America and then be put ashore in Leith, just outside Edinburgh.

Permalink Reply by Anita Adamitis Scarborough on March 29, 2017 at 9:27am
Colin,
In case you haven't seen this there are several articles online about Lithuanians in Scotland. I am attaching one. Some Lithuanian immigrants arrived at Ellis Island with an occupation of 'coal miner' because of their stay in Scotland.

Bujauskas is a name I've never seen before, so I thought I'd look into it a bit, thinking that it might be a rare name.  The result:  eh, not so much.  There are lots of American records with the name and 18 listings in the Lithuanian Internet Phone Directory.  So, it's not common, but not rare. There is a concentration of names in Mariampoles County.  You suggested Sunskai as a possible place of origin.  I'm thinking that might actually be Sūsninkai.  It's in an eastern corner of Mariampoles County, near the border of Alytus County.  The next place name to the east, directly on that border, is Išlandžiai.  I mention this because I found this village as a place of origin for a Petras Bujauskas who emigrated to Canada in 1928.  A year later, he is on an outgoing manifest to the UK with an intended distination of Vilkaviškis, Mariampole County (which is a place in my family history, as it happens).  Maybe he was just disembarking at the train station there.  This is a Peter much younger than yours, by the way, not the same person.  Another place name associated with this surname in records is Liudvinavas, about 20km north of Sūsninkai.

The point of all the above is that you might want to write to some of the Mariampole addresses in the phone directory and see if they are connected to your grandparents.

As you alluded to, the -iene name ending is a woman married to a man with the surname, or a widow of that man.  The -aite ending (for -as names; -yte for -is names, etc.) denotes an unmarried female.  I would write a short letter in English.  If they're not learned in the English language themselves, they will have a relative or friend who is.  Most important:  include your email address so that someone can get back to you electronically.  I've had about 50% response rate with these kinds of letters.

Thank you very much for this extremely helpful response. I'll certainly take the steps that you suggested and will also add the new possible origins to the search (a researcher in Vilnius will be doing some digging for me when the archives open once again).

I'm also hoping to arrange a short visit to Lithuania later this year. Having spoken with relatives, it seems that there was little or no mention ever made regarding the reason for leaving Lithuania, the surname having been anglicized in 1947. A cousin did tell me though that her mother Marjona (the eldest child and the only one born in Lithuania) was very proud  of her country of origin and when referred to as 'Mary the Pole' by a neighbour, would invariably respond with a robust affirmation of her nationality (in the UK people were referred to most commonly as Russians or Poles).

Permalink Reply by Colin White on August 25, 2017 at 12:32pm
Hi, I'd just like to mention that after a lot of blind alleys, I've finally discovered some concrete answers to the questions of the place of marriage and birth of my Grandparents.

With a couple of chance emails and the amazing help of a researcher ( who took only two days to effectively end my initial search), I now know the following.

My Grandfather was born in Didziosios Zariskes in Marijampole County, probably on November 20 1882 or December that year. My Grandmother was born on September 15 1877 in Asmonai. They were married in 1902 in the church in Sunskai. All of these places are within about 12 kilometres of each other . They lived and worked on the Vysolius farm in Sarakai. This is where their oldest daughter Marijona was born, on March 25 1904. They came to Scotland the following year.

I'm going to Vilnius in October and will absolutely make the time to visit Sunskai at least.

I have a similar story to yours, with my great-grandparents migrating to Bellshill, Scotland in about 1902. Four of their children were born on the Sukalupis farm near Lauckaimis (which is close by Kudirkos Naumiestis, then called Vladislavov). Two more boys were born in Scotland before they settled in Bothwellhaugh where my great-granddad lost a leg in a mining accident in 1911.

All the boys eventually went to New Jersey in the 1920s, which, as you hint, may have been the family's original planned destination. We travelled to Lithuania 18 months ago and visited those places. My guide was the same man who organised our research for Lithuanian records, Vilius Vaseikis. We had a very good experience with Vilius.

I hope to visit Lithuania again in the not-too-distant future.

Your story is very interesting and as you say, quite similar to my own. I see that your great-grandparents came from the same general area as my grandparents, albeit much closer to the border of what is now Kaliningrad. Here's a link which may be of interest to you.

Bellshill is around 14 miles from where I live, as is Bothwellhaugh. Bothwellhaugh was demolished in 1963 and now lies at the bottom of the lake in Strathclyde Park in Hamilton, South Lanarkshire.

I visited Vilnius in October last year and took a day to travel to Marijampole. With the help of the tourist office there, I was then able to go to the village of Sunskai and spend some time in the church (and with the priest) where my Grandparents were born. It was quite an experience. I'll be going back again in October as part of the Erasmus Teaching Exchange scheme, spending a few days working at Marijampole College and a weekend in Vilnius.

You may be interested to know that you would be entitled to apply for the Certificate of Lithuanian Descent. I did so when I was in Vilnius and last week, had the great pleasure of receiving this at the Embassy of the Republic of Lithuania in London.

Thanks for getting in touch and best wishes,