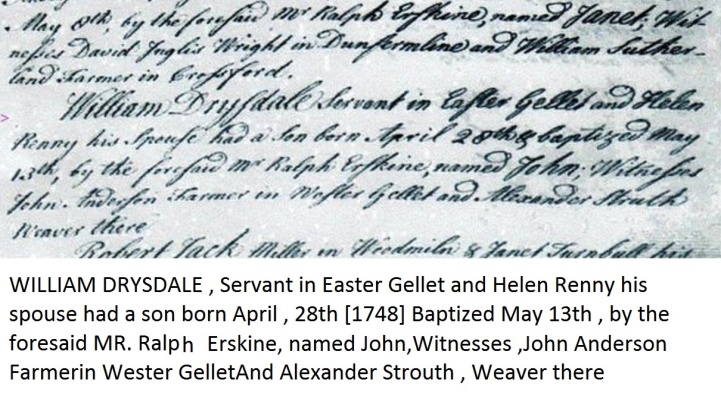 William Drysdale And Helen Renny are in my direct lines , William  apparently a  follower of a known Jacobite , Rev. Ralph Erskine ,Erskine who was later removed from his seat in the clergy and from what I understand the grand-Nephew of the Lady Erskine in the Mary Queen of Scots Affair .

On May 13 1748 Erskine Presented William and Helen's son John to the congregation in Dunfermline ... see below


The Scottish episcopalians had refrained from overt expressions of Jacobite sympathy such as had come from them in 1715: but they remained non-juring.

James' patronage of their hierarchy further prejudiced them ; and many of their meeting-houses had been burnt during Cumberland's campaign.

On August 12, 1746, the royal assent was given to an Act which empowered the local authorities to close meeting-houses attended by five or more persons whose minister had failed to take the oaths by September 1, 1746

and condemned unlicensed officiating ministers to six months' imprisonment for the first, and transportation for life for

The Scottish episcopate being deeply suspect, ordinations by an English or Irish Bishop were alone recognized. By a later Act (May 13,1748) ministers who had been ordained by a Scottish Bishop and had qualified before September 1, 1746, were expressly debarred (as from September 29, 1748) from a continuation of their licences. The deaths of James (January 1, 1766) and of Charles (January 31, 1788) enabled episcopacy to purge itself of Jacobitism : but it was not even partially relieved from the penal laws pressing upon it until the Act of June 15, 1792

Scroll down to the reply section