Who are your Dutch ancestors?

Who are your Dutch ancestors? Have you been able to trace them into The Netherlands? Where did they come from?

Permalink Reply by Wynand Hendrik van Bakel on June 26, 2010 at 10:05pm
My father, Willem Arie van Bakel, and his family relocated from Rotterdam to South Africa before ww2. Prior to that I have reason to believe that they originally lived in the Helmond area, Noord Brabant. My research so for indicates that they have changed the name from van Beackel to Van Baakel and then to van Bakel. A lot of my research indicates that they possibly lived in Woensel. As there are a number of van Bakels, I found it quite difficult to distinguish between the various van Bakel groups from 1800 further back.

I have found thousands of Dutch ancestors on Genlias.

Permalink Reply by Cecilia Eppink on October 25, 2010 at 1:08pm
The brickwall fell down.. We found Engelena's parents! Big time bonus... We found her grandparents as well. The 16 year search ended very happy.

Permalink Reply by Cecilia Eppink on October 25, 2010 at 9:18pm
My cousin, Mary, wrote directly to the Archives in the Netherlands to get a copy of Engelena's birth certificate. One she had the name of her parents she was able to go back another two generations.

Permalink Reply by Annemarie on September 11, 2010 at 2:04pm
I have been able to trace my parental ancestors back t0 1570 Vlaardingen The Netherlands, my maternal side goes back to early 1800 Germany with the name Spoeltman
Grand father mothers side , De Koning from Middelburg
Other grand mother from fathers side van der Vos from IJsselmonde near Rotterdam
Other names, van Haren, Mulder, Spittel and van Aedrichem

My Dutch surnames,early in America, in New York & New Jersey were: BANTA,DEBAUN,DENYCE,DIERCKS,DRABBE,HELLING,HENDRICKS,JANS,MEET,TERHUENE,VANDERSTRAATEN & VAN NUYS. Hopefully, I haven't forgotten any of the names.

P.S. The BANTA's were from Friesland.

Or should I say 'Cousin?' My name is Mary Hunter Linneman and I'm related to the Epke Jacobse Banta family too! Even though I'm related to the Banta's by marriage--my cousin married a Banta descendant--I'm still excited about learning more about this family and its allied lines.

Please contact me. I'm sure we have lots of family in common!!

I have just discovered that I am related to the BANTA family who came from Friesland, Netherlands, to Nieuw Amsterdam in 1659. While I'm only related to the Banta family by marriage, I'm STILL excited about finding more information of this new [to me!] family line.

My emigrant ancestor was EPKE JACOBSE (BANTA), born about 1619, in Friesland, Netherlands, and died 23 Oct. 1686, Bergen Co., NJ. Epke {an unusual name, I've learned} married Sistke Dircksdr (spelling?) about 1650, and had 5 sons: Cornelius, Seba, Hendrick, Dirck and Wiert, before they left Holland. The family left on the ship De Trouw and landed in Nieuw Amsterdam on 12 Feb. 1659.

They settled first in New Haarlem, NY, and then not long afterward re-located to Flushing, on Long Island, NY, where Epke was an innkeeper for several years. In 1669, Epke was appointed as an appraiser for an estate in the company of John Lawrence, who would eventually become the Mayor of New York. In 1671, Epke purchased a mill in Jamaica [Yemecah], NY, and became a miller for a short time before he and the family moved to Bergen Co., NJ. about 1675. Apparently, Sitske Dircksdr died before she could make the trip to New Jersey or that fact may have impelled them to move away.

This portrait is of Epke Jacobse (Banta) was painted about 1650, shortly before or after his marriage. 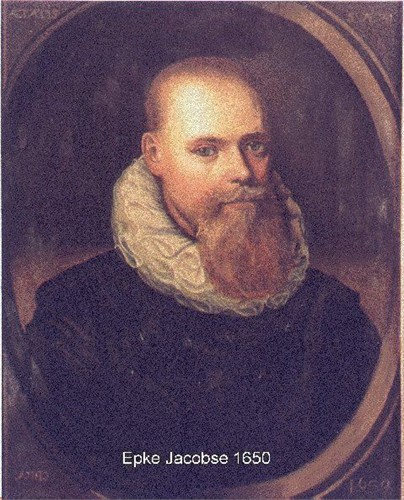 My ancesterrs I am researching are  Sutphen,  Voorhees,Van Duyn,Woertman in which all had migrated to America.,NY then NJ. I started searching for, and ,researching  this past year ,not kmowing anything ,about my fathers side of my family . This has opened up a whole new world for me.I am looking forward to learning much ,much more!

Got as far as finding my 11x great grandfather in Vlaardingen Zuid Holland, The Netherlands and got stuck in 1560 as they did not have the surname yet at that time. Very hard to find Lucas Willemszoons and things like that s and find the correct ones :) But I am happt enough with the 2100 people I was able to find.