My direct HARRISON line appears to have stayed in Virginia along both shores of the James River from the 1600's thru 1945 when my mother married my father and moved out of VA.

That's where we get stuck - not sure who the last Robert's parents were. There are connections to the Charles City Co., VA Harrison's also.  I suspect the the line goes back to Benjamin HARRISON (the first) who is buried on Jamestowne Island.

Anyone else researching these Harrison's or any of the wives' surnames?

Hmmmmm..............have you been there lately?  Not so sure that is not a possibility.  I too have fear that something will happen to her headstone.  I remember the headstone being in woods.  When my Dad took me there about 2 months ago I was in SHOCK!

I will look this weekend and take pictures of the surrounding area.  There is an abandoned house there, but not sure it is next to that headstone.  Will let you know.

I am having issues with posting replies!  I edited my last post and added a bunch of info, but it's not showing up.

Yeah, we were by there during the summer of 2012 and, come to think of it, the house to the left as you face the headstone from the road, didn't look occupied. Pretty sure that's the one that goes with the graveyard. I remember it being very overgrown in the late 50's/early 60's, but it's been cleared for several years.  I have a cousin in Hopewell who checks on it occasionally.  When he first started doing that, the owner of the property came after him to 'get out', so my cousin went to a Marks relative who was a lawyer and had a letter written to the owner explaining that VA law allows descendants access to family graves.  That was the end of that.

It was back in the 80's and 90's that I worried about the 'housing development' idea.  When the house and lot were for sale, I was shocked at how expensive it was!!

I will be in PG county again in June for the Butts, Clary, Fenner, Figg annual reunion and I would love to see Henrietta's marker at Racefield/Rosewood.  Exactly where is that?

My mother, Helen Butts, was born and raised at the corner of Nobles Road and Ward Creek Road and she often talked about paddling a boat from the Jordan Point lighthouse, where her Uncle T. Fenner was the keeper, down river to Blairs where her mother's father lived (Richard Marable).  Lots of history in the area.

I am passing that way on Wednesday.  I will get the specifics so you can easily find it.

Do you know where Jordan Point is?  I can get those specifics also if you need them.

Yes, I'm very familiar with Jordan point and the lighthouse where my mother's "uncle T. Fenner" was the keeper in the early 1900s.

I've been in touch with another Harrison descendant - his line traces back to one of my grandfather's (William Henry Harrison Jr.) brothers.

I know he was working on creating a Google map that showed directions to various Harrison sites, including Henrietta's marker.  Diane, of course, can get you detailed directions and also let you know how grown up it is at this time.  Over the years, I've visited it many times and sometimes it's very easy to spot; other times you really have to look for it! If either of you are interestedin accessing his map, please let me know!

Attaching (hopefully) a photo of the Harrison tomb located at Bicars, which I saw on a visit with some of my cousins - probably in the early or mid-60's. (I took this either with a Brownie camera or a Kodak point and shoot, so the quality isn't the best.)  It is my understanding that both Robert Harrison's were laid to rest in this mausoleum, along with other family members.  The only other detail that I remember from that day is that this was located in the front yard of a house. Whether or not it was original Bicars home, I'm not sure. 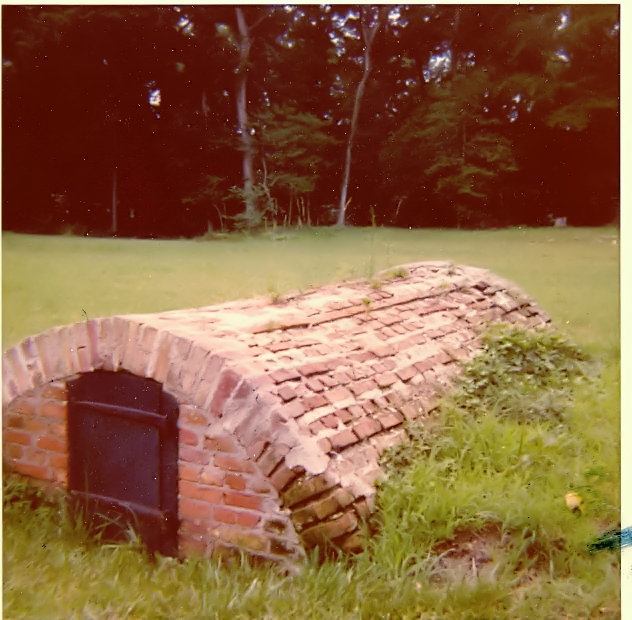 Where is the Harrison tomb and Bicars located?  I understand that it is near Jordan Point, is that correct?

I was only there that one time many years ago. Couldn't find it if I had to.  I have cousins in the area that know the locations.  I'll see if I can get directions from them.  In the early 90's we did a tour of all the places our grandparents lived, but didn't go anywhere that previous generations had lived.  I also have lots of books and old records on the area - let me do some checking . . .  Diane may know its location also.

I believe all of these sites are relatively close to Jordan's Point.  Please refresh my memory - Jordan Point is where the large country club (?) is located right before you get on the Benjamin Harrison bridge that crosses the James? I've been by there so many times, but have no direct line connection to Jordan Point so have never stopped.  Don't you turn off of Route 10 on to Jordan Point Road (might be what my mother called that road rather than the 'official' name)?

We're planning on spending a week researching in the area in early May, so I may not find out exactly where it is until then . . .

Yes, Jordan point is at the south end of the Benjamin Harrison bridge.

I have spoken with Charles Harrison Marks who lives in a house on the old Bicars property.  The Harrison tomb is in his front yard.  The Bicars land was located where Chappells creek meets Tar Bay on the south side of the James River, slightly east of Jordan Point.